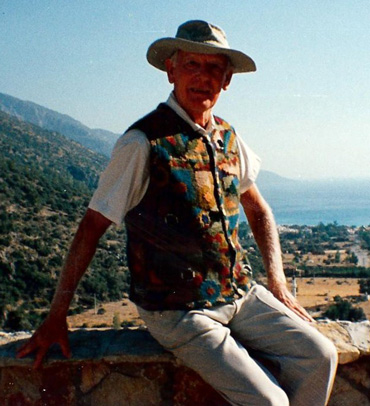 Humanist, artist and Ballet Master Geoffrey Davidson was born in England in 1921. He spent his youth in Kenya. During 2nd World War, he came back to England and fulfilled his military duty by working down the mines. At the end of the War, he started studying ballet and became a student of Madame Marie Rambert. After finishing his studies, Geoffrey danced in various classical balet companies, especially with London’s Festival Ballet being a member of that company from 1950 until 1960. As a ballet master he worked in London, Portugal and in 1972 came to Ankara at the invitation of Dame Niette de Valois to teach at the Ankara State Ballet Company for the 1972 to 1973 season. In 1973, he joined the İstanbul State Conservatoire where, with Sebnem Aksan, the Ballet Department was inaugurated. He trained many dancers over the next 10 years.

Retiring from teaching in 1983, he carried on his life travelling between Ölüdeniz near Fethiye and Sussex in England, and Nairobi Kenya. He was taught to knit as a young boy and over the years he has made gartments both by hand and machine, especially dance costumes. In 1991, he discovered the work of Kaffe Fassett the famous designer, who gave him a new outlook into the craft. One year later, his own designs began to grow encouraged by finding vegetable dyed wools whilst on a visit to Kenya. Still concentrating on wearable works such as waistcoats and jackets, an artist friend Ronald Wilson suggested that he should enlarge his talents and knit wall hangings. Pure wool was his favourite material, especially vegetable dyed ones from Nairobi and Turkish, including hand – spun “Kilim” yarns. While knitting, Geoffrey was influenced by the Oludeniz and Kenyan areas, Picasso, Dali and Gaudi. His fine technique, colour combinations and patterns recall the art of miniature painting.

His other hobbies were gardening, cooking, reading and tennis. Until two years before his death, he was still playing tennis. Geoffrey Davidson died at his brother’s home in Howe, England on January the 5th 2009.

Each unique artwork are eternal... 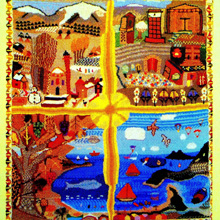 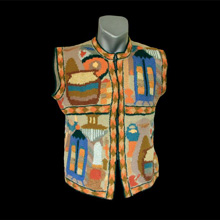 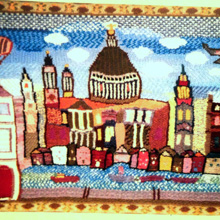 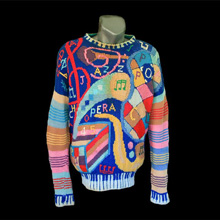